October 21, 2008, Bellevue, Washington PACCAR reported good earnings and revenues for the third quarter and first nine months of 2008.  There are over 1.5 million PACCAR commercial vehicles in service worldwide, the largest population in our history, said Mark C. Pigott, chairman and chief executive officer.  These vehicles generate steady aftermarket revenues and many of them also contribute financial services income, which partially offset reduced truck build rates worldwide.  In these turbulent times, PACCAR is experiencing lower truck demand in Europe, Mexico and Australia, and continued softness in the U.S. and Canada, which will reduce financial results in the fourth quarter of 2008 and into 2009. Pigott added, As in previous cyclical downturns, the company is rigorously aligning operating costs with market conditions while selectively investing in capital projects and new products that will generate excellent customer benefits.  PACCARs products, manufacturing facilities and distribution centers are the best in our 103-year history and position the company strongly when the industry returns to a normal vehicle replacement cycle.  I am very proud of our 20,000 employees delivering third quarter profits comparable to the same period last year.

Global Truck Markets
DAFs premium vehicles are the quality and resale value leaders in Europe.  Industry truck sales in Western and Central Europe above 15 tonnes are expected to be comparable this year to the 340,000 units sold in 2007, shared Aad Goudriaan, DAF Trucks president.  After robust growth for a number of years, the European economy and truck markets are now slowing.  As a result of the recent slowdown in customer demand, DAF will reduce its build rate during October and anticipates the 2009 commercial vehicle market will reflect the slower economy.  European industry truck sales in 2009 are difficult to predict due to economic uncertainty, but they could be at a level of 260,000-300,000 units.

Declining housing starts and auto production have impacted U.S. and Canadian Class 8 truck sales throughout 2008, said Dan Sobic, PACCAR executive vice president.  Industry retail sales are expected to be approximately 150,000 vehicles this year.  Industry retail sales are projected to improve slightly in the second half of 2009 and are expected to be in the range of 170,000-210,000 as fleets replace vehicles after several years of lower purchases.  Several of our major customers are reporting increased third quarter income due to good freight traffic and lower fuel prices. Sobic noted, Kenworth and Peterbilt continue to achieve a strong share of industry sales due to their superior quality, reliability and industry-leading resale value.

Quarterly Dividend
The PACCAR Board of Directors approved a fourth quarter regular quarterly cash dividend in the amount of $.18 (eighteen cents), payable on December 5, 2008, for shareholders of record on November 18, 2008.  Over the last five years PACCAR has increased its regular quarterly dividend by an average of 23 percent per year and has paid a dividend every year since 1941.  PACCAR purchased $29.8 million of its shares in the third quarter.

Financial Highlights Third Quarter 2008
Highlights of PACCARs financial results during the third quarter of 2008 include:

Financial Highlights Nine Months 2008
Financial highlights for the first nine months of 2008 include: 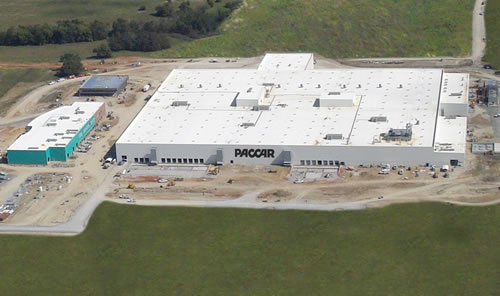 PACCAR has also invested nearly $60 million to install state-of-the-art robotic cab paint facilities at its Kenworth plant in Chillicothe, Ohio, and its Peterbilt plant in Denton, Texas.  These investments have enhanced product quality and increased productivity.

Financial Services Companies Achieve Good Results in Difficult Markets
PACCAR Financial Services (PFS) has a portfolio of 169,000 trucks and trailers, with total assets of $10.7 billion.  PACCAR Leasing, a major full-service truck leasing company in North America with a fleet of over 32,000 vehicles, is included in this segment.

Industry Awards
Kenworth Truck Company achieved the highest ranking in customer satisfaction among Class 8 truck owners in the Over the Road and Vocational Segments, according to the recently released J.D.  Power and Associates 2008 Heavy Duty Truck Customer Satisfaction StudySM*.  Kenworth swept the product quality awards in 2008, the same as in 2007, said Bob Christensen, PACCAR senior vice president.  This recognition is wonderful for our customers.  Kenworth has an outstanding record of delivering industry-leading customer satisfaction in performance, quality and low cost of ownership. Since 1993, PACCAR has earned 26 J.D.  Power awards with the closest competitor earning nine.

DAF Trucks won the Fleet Truck of the Year award for its CF85 model for the eighth time at the recent Motor Transport Awards in London.  The award was organized by the leading British magazine Motor Transport, and the judging panel comprised twenty-five prominent United Kingdom based fleet operators.

At the third annual Global Six Sigma Awards, PACCAR was honored by receiving the Six Sigma and Business Improvement CEO of the Year award and Kenworth earned the manufacturing process award.  PACCAR introduced Six Sigma in 1997 and has trained over 11,000 employees who have delivered manufacturing efficiency gains of 5-7 percent per year, realizing a cumulative benefit of $1.5 billion, commented Helene Mawyer, PACCAR vice president.

Educational Leadership
PACCAR has over 20,000 employees worldwide and is committed to supporting leading educational institutions in the communities in which our employees reside, said Mark C. Pigott, chairman and chief executive officer.  For over 100 years, PACCAR has supported educational excellence through donations to universities, independent college funds and various scholarship programs always focused on the betterment of students and society.

Recent beneficiaries of PACCARs educational and supporting programs include: 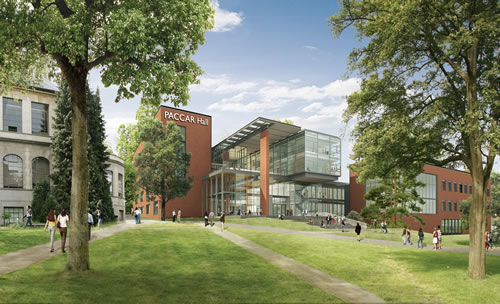 PACCAR Hall at the University of Washington is scheduled to open in 2010.

PACCAR will hold a conference call with securities analysts to discuss third quarter earnings on October 21, 2008, at 9:00 a.m. Pacific time.  Interested parties may listen to the call by selecting Live Webcast at PACCARs homepage.  The Webcast will be available on a recorded basis through October 31, 2008.  PACCAR shares are listed on the NASDAQ Global Select Market, symbol PCAR, and its homepage can be found at www.paccar.com.

*J.D. Power and Associates 2008 Heavy Duty Truck Studysm.  Study was based on 2,692 responses from principal maintainers of heavy-duty trucks.  For more information please go to www.jdpower.com.