"PACCARs stellar balance sheet and outstanding cash flow allowed the company to invest record amounts in capital projects and research and development during the year, noted Pigott.  Major investments in diesel engines, hybrid vehicles, new facilities and production efficiencies set the stage for further growth.  It is a significant achievement to record such excellent results, especially considering that U.S. and Canadian Class 8 industry retail sales were 45 percent lower than the previous year.  I am very proud of our 21,800 employees who have delivered exceptional performance to our customers, shareholders and dealer network."

Truck and other gross margins (revenues less cost of sales) were dampened by a weak truck market in the U.S. and Canada, the negative impact of higher commodity prices and higher expenses associated with long-term strategic projects.  In 2007, PACCAR invested a record $255 million or 1.8 percent of sales in product research and development.  The higher level of research and development expenditures and other spending will continue for major multi-year projects such as developing solutions to meet EPA 2010 and Euro 6 emissions regulations, designing new vehicle platforms worldwide, and launching innovative aftermarket customer support programs.

Environmental Leadership
"PACCAR is the industry leader in the development of environmentally friendly technologies," said Tom Plimpton, PACCAR president.  PACCARs medium-duty hybrid vehicles are estimated to deliver up to 30 percent better fuel economy and are planned to be in production by mid-2008.  "PACCARs no-idle climate control and hotel power load solutions in Kenworths CleanPowerTM and Peterbilts ComfortClassTM vehicles reduce emissions by 12 percent and improve fuel economy up to 8 percent," added Plimpton.

PACCAR and Eaton Corporation are jointly developing proprietary hybrid technology for Class 8 commercial vehicles in North America.  The innovative new products will be introduced exclusively in Kenworth and Peterbilt trucks in the North American market and are targeted for production by the end of 2009. 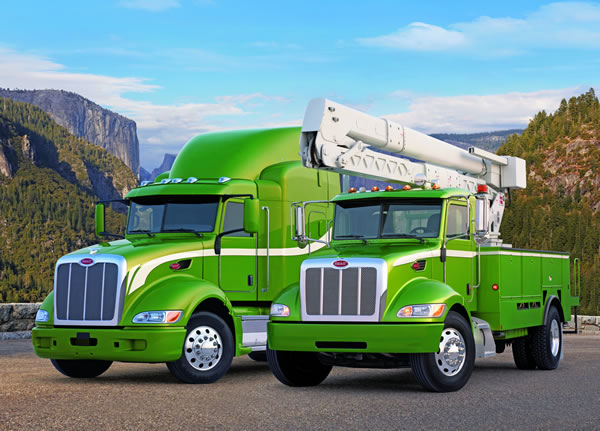 Peterbilt Hybrid Models 386 and 335 are estimated to improve fuel economy by up to 30 percent.

SCR and EGR Solution for 2010 Engine Emission Requirements
PACCAR will use selective catalytic reduction (SCR) in combination with exhaust gas recirculation (EGR) in its PACCAR engines for Kenworth and Peterbilt to meet the oxides-of-nitrogen (NOx) requirements of the 2010 EPA diesel engine emissions regulations.  "The combination of SCR and EGR will provide PACCAR customers a highly efficient solution to meet the rigorous 2010 emission requirements.  PACCARs world-class vehicles have successfully operated SCR emission systems in Europe for several years," said Craig Brewster, PACCAR assistant vice president.  Starting in 2010, allowable NOx emissions will be reduced by more than 80 percent from the 2007 standard.  "PACCAR is working with SCR distributors to ensure a nationwide infrastructure is in place to serve our customers," added Brewster.  "PACCAR premium-quality engines will be offered to our customers to complement the engines available from our existing suppliers in North America in 2010."

DAFs new cab paint facility in Westerlo, Belgium, is expected to open in 2010.

Global Truck Market
"Industry sales above 15 tonnes in Western and Central Europe were a record 340,000 units in 2007," said Aad Goudriaan, DAF president.  "The 2008 market could range from 330,000 to a record 350,000 units.  DAF has a medium-term goal of 20 percent market share, and as the leader in premium-quality products, DAF will benefit from continuing growth in the expanded European Union," noted Goudriaan.  DAF achieved record sales and profit in 2007.  PACCAR sales in Australia and Mexico also set records in 2007.

"Class 8 industry retail sales in the U.S. and Canada were 175,800 in 2007 compared to 322,500 in 2006 and reflected the impact of the 2006 pre-buy as well as the slowdown in the housing and automotive sectors," said Dan Sobic, PACCAR senior vice president.  "Industry retail sales in 2008 are expected to be in the range of 175,000 to 215,000 vehicles, reflecting continued economic softness through the first half of the year.  PACCARs 2007 retail market share of the U.S. and Canadian Class 8 market climbed to a record 26.4 percent from the previous record of 25.3 percent for 2006." Tom Plimpton, president, shared, "The encouraging news is that fourth quarter 2007 industry Class 8 orders were 16 percent higher than a year ago.  In fact, industry Class 8 orders increased every quarter in 2007, as customers assimilated their pre-buy purchases and balanced their logistic capacity with lower freight demands and an uneven domestic economy."

Financial Services Achieve Record Earnings of $284.1 Million
PACCAR Financial Services (PFS) assets climbed to $10.7 billion in 2007.  The PFS portfolio consists of more than 169,000 trucks and trailers and includes PACCAR Financial Europe, with over $2.9 billion in assets and PACCAR Leasing, a major full-service truck leasing company in North America and Europe, with a fleet of over 32,000 vehicles.

Record quarterly pretax income of $76.2 million was 15.1 percent higher than the $66.2 million earned in the fourth quarter last year.  Fourth quarter revenues rose to $327.3 million compared to $260.7 million in the same quarter of 2006.  For the full year, revenues increased to $1.19 billion from $950.8 million for 2006 and pretax income rose by 14.8 percent to a record $284.1 million compared to $247.4 million year-over-year.  "PACCAR Financial Services profitably supports the sale of PACCAR trucks in 18 countries with a comprehensive portfolio of finance, lease and insurance products," said Ron Armstrong, senior vice president.  "Growing assets, solid margins, strong credit quality and rigorous portfolio management are providing excellent earnings.  PACCARs superb balance sheet, complemented by its AA- credit rating, enabled the company to continue to grow its asset base and meet its funding needs even with the turbulent credit markets worldwide."

PACCAR Leasing achieved its fourteenth consecutive year of record profits during 2007.  The launch of PacLease Europe last year grew the PacLease network to 328 locations in North America and Europe this past year.

PACCAR will hold a conference call with securities analysts to discuss fourth quarter earnings on January 29, 2008, at 9:00 a.m. Pacific time.  Interested parties may listen to the call by selecting "Live Webcast" at PACCARs homepage.  The Webcast will be available on a recorded basis through February 5, 2008.  This release contains "forward-looking statements" within the meaning of the Private Securities Litigation Reform Act.  These statements are based on managements current expectations and are subject to uncertainty and changes in circumstances.  Actual results may differ materially from those included in these statements due to a variety of factors.  More information about these factors is contained in PACCARs filings with the Securities and Exchange Commission.