"PACCARs profitability has enabled it to systematically increase its technology investment in all facets of the business, including product design and development, customer sales, supply chain management, manufacturing and assembly, financial services, and aftermarket support programs," noted Pigott.  "PACCAR sells its products into over 100 countries.  In 2006, over 48 percent of company revenues and 47 percent of profits were generated from non-U.S. operations.  In addition, PACCAR Financial achieved a record $4.2 billion in new loan and lease volume and the Parts and Service business surged to nearly $2 billion in sales for 2006."

PACCAR Delivers Excellent Shareholder Return
Board Authorizes Share Repurchase
PACCARs return on beginning shareholder equity (ROE) was a record 38.3 percent in 2006 compared with 30.1 percent in 2005.  PACCARs total shareholder return was 47.2 percent in 2006.  In the last ten years, PACCAR shareholder return has averaged 25.4 percent per year, exceeding the S&P 500 Index for the previous one-, five- and ten-year time periods.  The companys ten-year compound annual growth rate (CAGR) in revenues is 13.6 percent and net income is 22.2 percent, significantly higher than the companys peer group and the S&P 500.

On December 5, 2006, PACCARs Board of Directors approved the repurchase of an additional $300 million of the companys common stock.  The stock repurchase program reflects the Boards confidence in PACCARs global business strategy and the companys ability to consistently deliver outstanding earnings and cash flow, said Mike Tembreull, vice chairman.  During 2006, the company repurchased 6.24 million of its common shares (split adjusted) for an investment of $302 million (including 32,900 shares repurchased in the fourth quarter of 2006 for $2.1 million).

Operating Highlights 2006
During 2006 PACCAR achieved a number of milestones, including:

Financial Highlights Full-Year 2006
For the full-year 2006, financial highlights include:

New PACCAR Engine Facility and Technology Center
PACCAR recently announced plans to build a $400 million engine manufacturing and assembly facility in the Southeast United States.  Construction of the 400,000-square-foot facility will begin in mid-2007 and is due to be completed in 2009.  This investment will enable the company to manufacture its 12.9L and 9.2L PACCAR engines for use in Kenworth, Peterbilt and DAF vehicles throughout the world.

"This investment in PACCARs newest and most technologically advanced facility, including a Technology Center, is a further example of PACCARs commitment to maintain its product leadership," said Jim Cardillo, executive vice president.  "PACCAR has invested over $2.8 billion over the past decade to develop the industrys highest-quality products and expand its leading manufacturing and technology platforms." 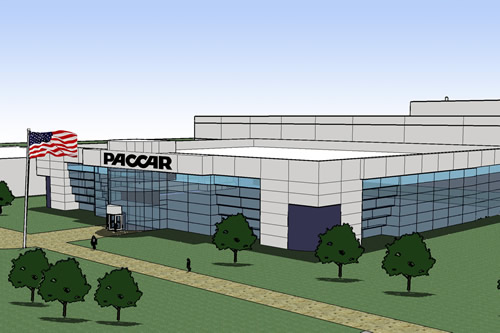 PACCARs manufacturing facility and Technology Center will open in 2009. 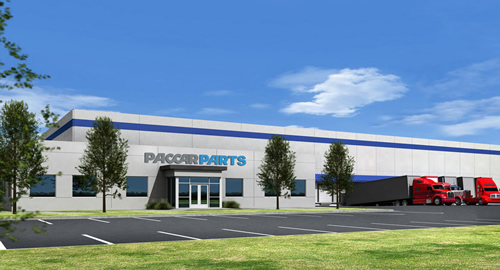 PACCAR Achieves Record Market Share in Robust Global Truck Markets
During 2006, industry truck sales in Western Europe above 15 tonnes were a record 268,000 units and are expected to remain strong at 250,000-270,000 units for 2007.  "DAF has increased profit and market share for seven consecutive years due to its premium products, industry-leading aftermarket programs, comprehensive financial services and a growing independent dealer network," said Aad Goudriaan, DAF Trucks president.  "DAFs market share above 15 tonnes in 2006 was a record 14.5 percent versus 13.7 percent in 2005.  DAFs long-term goal is to achieve over 20 percent market share."

DAFs geographic coverage has expanded considerably over the past decade, with nearly 20 percent of DAFs sales originating outside its traditional Western European market.  DAF is a market leader in Central Europe with a significant presence in Poland, Romania, Hungary and the Czech Republic.  In addition, DAF has developed export programs to serve customers in Asia, Africa, the Middle East, North America and Australia.

U.S. and Canadian Class 8 industry truck retail sales are forecast to be 200,000-230,000 units in 2007 compared to sales of 320,000 during 2006.  "Record industry truck sales during 2006 were driven by strong replacement demand, healthy freight volumes and accelerated buying ahead of the 2007 change in emissions regulations, noted Tom Plimpton, president.  "Many PACCAR customers achieved record profitability during 2006, enhanced by Kenworth and Peterbilt vehicles that delivered exceptional quality, superior driver retention and excellent life-cycle economics." In the U.S. and Canada, Kenworth and Peterbilt achieved a record 25.3 percent Class 8 retail market share in 2006, compared to 23.1 percent posted during 2005.

Financial Services Achieves Record Earnings of $247.4 million
PACCAR Financial Services has a portfolio of 158,300 trucks and trailers and total assets of $9.8 billion.  Included in this segment is PACCAR Leasing, a major full-service truck leasing company in North America, with a fleet of 28,500 vehicles.

"PACCAR Financial Services (PFS) profitably supports the sale of PACCAR vehicles in 17 countries with an extensive array of finance, lease and insurance products," said Ken Gangl, senior vice president.  "A growing asset base, robust economic environments and consistent finance margins have contributed to year-on-year profit growth.  PACCAR Financial Europe (PFE) offers competitive financing programs in 13 countries and manages a portfolio of more than 35,000 trucks and trailers.  Total assets at PFE grew to $2.25 billion in 2006, up 22 percent from $1.85 billion in 2005, by delivering customized financial solutions to DAF dealers and their customers.  During 2006, PFE established financing operations in Hungary and the Czech Republic."

PACCAR is a global technology leader in the design, manufacture and customer support of high-quality light-, medium- and heavy-duty trucks under the Kenworth, Peterbilt and DAF nameplates.  It also provides financial services, information technology and distributes truck parts related to its principal business.  PACCAR shares are traded on the Nasdaq Global Select Market, symbol PCAR, and its homepage can be found at www.paccar.com.

PACCAR will hold a conference call with securities analysts to discuss fourth quarter and full-year 2006 earnings on January 30, 2007, at 9:00 a.m. Pacific time.  Interested parties may listen to the call by selecting "Live Webcast" at PACCARs homepage.  The Webcast will be available on a recorded basis through February 6, 2007.

This release contains "forward-looking statements" within the meaning of the Private Securities Litigation Reform Act.  These statements are based on managements current expectations and are subject to uncertainty and changes in circumstances.  Actual results may differ materially from those included in these statements due to a variety of factors.  More information about these factors is contained in PACCARs filings with the Securities and Exchange Commission.