April 24, 2007, Bellevue, Washington PACCAR Inc reported excellent revenues and record first quarter net income for the first quarter of 2007, said Mark C. Pigott, chairman and chief executive officer.  PACCARs balanced global diversification has benefited from a strengthened Eurozone economy and steady GDP growth in North America, in combination with the growth of aftermarket parts and financial services, added Pigott.  PACCARs business outside the U.S., which is over 50 percent of the companys total revenues, is making a major contribution to the excellent performance, and is providing a counter-cyclical balance to slower business in North America.

PACCAR has reduced production levels in its U.S. and Canadian facilities to reflect lower industry demand, which has been impacted by higher-cost 2007 emission engines.  The lower demand and proactive build rate adjustments will have a dampening effect on company financial results until the industry absorbs new vehicles purchased in 2006, said Pigott.

Highlights of PACCARs financial results during the first quarter of 2007 include:

PACCAR sells into 100 countries and the companys high-quality products and services have earned a reputation for innovation and excellent life-cycle costs.  PACCARs revenues reflect robust global markets contributing to the companys profit growth of more than 600 percent in the last decade.

During the first quarter of 2007, PACCAR repurchased 719,304 of its common shares for $48.2 million under a $300 million share repurchase authorization from its Board of Directors.  Over the past 15 months, PACCAR has bought approximately 6.9 million shares (split adjusted) for a total investment of over $350 million, noted Mike Tembreull, vice chairman.  PACCARs share repurchases reflect the Boards confidence in the companys successful global business strategy and excellent long-term growth. PACCAR has achieved an average annual total shareholder return for the last ten years of 27.2 percent compared to 8.7 percent for the S&P 500 Index.  The companys stock, including reinvested dividends, has outperformed the S&P 500 Index for the previous one-, three-, five- and ten-year time periods.

In January 2007, PACCAR announced plans to build a $400 million engine manufacturing and assembly facility in the Southeast United States.  Construction of the 400,000-square-foot facility will begin in mid-2007 and is due to be completed in 2009.  This investment complements the companys state-of-the-art engine factory in the Netherlands and will enable the company to manufacture 12.9L and 9.2L PACCAR engines for use in Kenworth, Peterbilt and DAF vehicles.  Jim Cardillo, executive vice president, said, PACCAR appreciates the very professional approach with which the states in the Southeast United States responded to this major economic investment opportunity.  We look forward to constructing a world-class, high-technology engine facility.

PACCAR Parts opened its new state-of-the-art 260,000-square-foot parts distribution center (PDC) on a 33-acre site in Oklahoma City this month.  In addition, construction will soon commence on a new PDC in Budapest, Hungary, which will support DAF Trucks ongoing expansion into Central and Eastern Europe.  Upon completion of the Budapest facility, PACCAR will operate 13 parts distribution centers globally, each strategically located to provide daily aftermarket parts support to PACCARs growing base of dealers and customers, said Rick Gorman, PACCAR vice president and PACCAR Parts general manager.  PACCAR Parts has more than tripled its sales since 1996, reaching almost $2 billion in 2006.  These capital investments will enable the business to continue its strong growth.

DAF will complete construction of a 76,000-square-foot engine test and research facility in Eindhoven in June 2007.  The twenty test cells in the development center will be the most technologically advanced in the world and will be instrumental in the design of new global PACCAR engines, said Aad Goudriaan, DAF Trucks president.

PACCAR opened a new office in Shanghai, China, in April.  The office is focused on sourcing parts for worldwide manufacturing and aftermarket sales, as well as the sale of PACCAR powertrain components to customers in Asia.  The Shanghai office complements PACCARs existing sales office in Beijing, which has been providing excellent customer support for fifteen years, said Tom Lundahl, vice president, purchasing.  The rapid development of the highway network in China has begun generating demand for high-quality, reliable commercial vehicles.  The Shanghai office will enable PACCAR to increase its participation in this exciting and important market.

PACCAR is an environmental leader in its industry.  Over the last ten years, the company has eliminated 60 percent of its factory packaging material (34,000 tons per year) by investing in returnable containers, installing new logistics software and making capital investments in suppliers manufacturing operations.  ISO 14001 environmental certification is complete for PACCARs facilities in Europe and Canada.  DAF, Peterbilt and Kenworth vehicles are manufactured with environmentally friendly materials so that 80 percent of the truck, by weight, is recyclable, commented Dan Sobic, senior vice president.

PACCAR is also a leader in the development of fuel-efficient and hybrid vehicle technologies.  Recent initiatives include:

PACCAR Financial Services (PFS) has a portfolio of more than 160,000 trucks and trailers, with total assets of $10 billion.  PACCAR Leasing, a major full-service truck leasing company in North America with a fleet of over 28,000 vehicles, is included in this segment.  Record first quarter pretax income of $65.6 million was 20 percent higher than the $54.8 million earned in the first quarter of 2006.  First quarter revenues jumped 24 percent to $264 million compared to $212.5 million in the same quarter of 2006.

PACCAR Leasing continues to expand its business with the PacLease network at 281 franchised and company owned locations in Canada, United States and Mexico, added Bob Southern, PACCAR Leasing president.  There is tremendous opportunity for PacLease to expand into Europe, utilizing the comprehensive DAF dealer network as well as exploring acquisitions of private leasing companies in Europe.

The European economy is enjoying a sustained period of economic growth, shared Aad Goudriaan, PACCAR vice president and DAF president.  Business confidence indicators are high and growth is increasing in Western and Central Europe.  As a result, industry truck sales in Europe above 15 tonnes continue to be strong and should be at least comparable to 2006 at 265,000-280,000 units.  DAF is increasing its production rates and is the commercial vehicle product quality and resale value leader in Europe.  In 2006, DAF increased its full-year market share to a record 14.5 percent.  DAFs long-term goal is to achieve over 20 percent market share, Goudriaan noted.

The U.S. and Canadian truck markets have declined, as anticipated, due to the industry prebuy in the second half of 2006.  Steady GDP growth has partially buoyed the regulation-induced market decline.  PACCAR is installing 2007 emission-compliant engines in 100 percent of its U.S. and Canadian vehicle production.  Our customers are reporting good operating results with the new engines and our production facilities have expanded their plant productivity leadership by being early adopters of the new technology, explained Tom Plimpton, president.  Kenworth and Peterbilt continue to achieve a strong share of industry orders due to their superior quality, reliability and resale value.  The company expects industry Class 8 retail sales to be 190,000 to 220,000 for 2007.

BusinessWeek (BW) magazine recognized PACCAR as one of the 50 best performing companies in the S&P 500.  PACCAR was ranked 10th on the list of the top performing companies in the S&P 500, and earned the highest ranking in the Industrials sector, based on BusinessWeeks comprehensive performance matrix.  BW evaluated average return on capital and sales growth for the past three years and then compared companies with others in their sector.  It is an honor for PACCAR to be recognized with other leading companies including Google, Nucor and Goldman Sachs, said Mark Pigott.  This is wonderful recognition for our dedicated employees around the world and reinforces PACCARs well-earned reputation as one of the premier global companies.

In its April 16, 2007, edition, Forbes magazine recognized PACCAR as a Global High Performer. Forbes reviewed 2,000 global companies and used a comprehensive set of performance criteria including long- and short-term return on equity, sales growth, net profit growth and return to shareholders to generate a list of 130 top-performing companies.  Forbes then selected the top performers in each industry and named PACCAR among the top five companies in the consumer durables segment, alongside Toyota, Honda and Harley-Davidson.

PACCAR will hold a conference call with securities analysts to discuss first quarter earnings on April 24, 2007, at 8:00 a.m. Pacific time.  Interested parties may listen to the call by selecting Live Webcast at PACCARs homepage.  The Webcast will be available on a recorded basis through May 4, 2007. 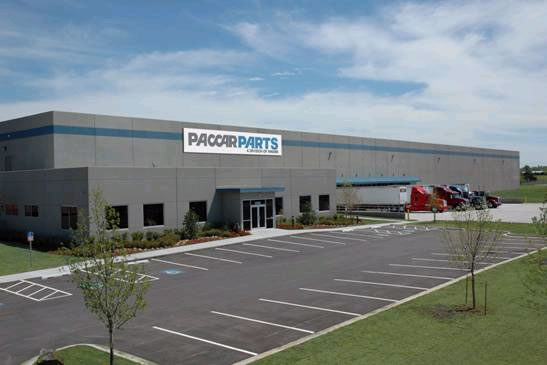