January 31, 2006, Bellevue, Washington "PACCAR Inc reported record revenues and net income for 2005 as well as earning its highest quarterly profit in its 100-year history," said Mark C. Pigott, chairman and chief executive officer.  "These outstanding results are especially noteworthy as the company celebrated its Centennial anniversary in 2005.  PACCAR has achieved 67 consecutive years of net profitability and has enhanced its distinguished reputation as one of the leading global technology companies.  The strength of the company is a direct reflection of the unparalleled innovation and dedication of our 21,900 employees worldwide."

"PACCARs balanced global diversification, world-class information technology, growing financial service companies and superior quality products have generated excellent financial returns," noted Pigott.  "PACCAR continues to benchmark and enhance its core competencies based on the strong results generated by excellent companies such as Microsoft, Dell, Toyota, Illinois Tool Works and Wells Fargo.  PACCARs profitability has enabled it to systematically increase its technology investment in all facets of the business, including product design and development, customer sales, supply chain management, manufacturing and assembly, finance, leasing and aftermarket support programs.  These investments have kept PACCAR well ahead of the competition and have highlighted PACCAR as a strong growth company in several industry segments: capital goods, financial services and logistics.  The companys 10-year compound annual growth rate (CAGR) in revenues is 11 percent and profit is 16 percent, significantly higher than the companys peer group and the S&P 500."

PACCARs return on beginning shareholder equity (ROE) was 30.1 percent in 2005 compared with 27.9 percent in 2004.  Total shareholder return has exceeded the Standard & Poors 500 Index for the previous three-, five- and ten-year time periods, averaging 27.1 percent per year for the last 10 years.  PACCAR has paid a dividend every year since 1941 and dividends per share have increased 345 percent over the last four years.  PACCARs excellent credit rating of AA- from Standard & Poors gives PACCAR Financial a competitive advantage by lowering borrowing costs in the capital markets.

Financial Highlights 2005
For the full-year 2005, financial highlights include:

PACCAR sells products into over 100 countries.  During 2005, 49 percent of revenues and over 46 percent of pretax profits were generated from non-U.S. operations.  PACCAR Parts had an excellent year in 2005 with sales of $1.69 billion and earned its 13th consecutive year of record profits.  PACCAR Winch, one of the largest winch manufacturers in the world, had record full-year sales and profits for 2005.

Helene Mawyer, vice president, added, "PACCAR has established a goal of 50 ppm for supplier parts quality the most demanding in the industry.  In order to assist suppliers in delivering world-class quality, PACCAR has increased its investment in suppliers production capability, which enables them to improve their product quality and cost structure." PACCAR has 850 supplier partners worldwide.

Global Market Update
During 2005, industry truck sales in Western Europe above 15 tonnes were a record 259,000 units, a 9 percent increase from 2004 results.  Industry truck sales in Western Europe above 15 tonnes in 2006 are expected to remain strong at 245,000-265,000.  DAF has increased profit and market share for six straight years due to its high-quality vehicles, comprehensive aftermarket programs, customized financing solutions from PACCAR Financial Europe and an expanding independent dealer network, said Aad Goudriaan, DAF Trucks president.  DAFs heavy-duty market share in 2005 was 13.7 percent versus its previous record of 12.8 percent in 2004.  DAFs long-term goal is to achieve over 20 percent market share, which is comparable to PACCARs Class 8 results in North America.

"Truck market expansion in North America has been driven by a strong general economy, increased freight volume and continued fleet growth.  Many trucking companies had record profitability in 2005 as ton-miles increased due to the strong economy," noted Tom Plimpton, president.  "In the U.S. and Canada, Kenworth and Peterbilt achieved a healthy 23.1 percent Class 8 retail market share in 2005.  U.S. and Canadian Class 8 industry truck retail sales could be 290,000-310,000 units in 2006, compared to sales of 287,500 during 2005, as customers continue to update and expand their fleets to satisfy the demands of a growing economy."

Financial Services Achieves Record Earnings of $199.9 million
PACCAR Financial Services has a portfolio of 144,400 trucks and trailers, with total assets of more than $8.35 billion.  Included in this segment is PACCAR Leasing, a major full-service truck leasing company in North America, with a fleet of 23,500 vehicles.

"PACCAR Financial Europe (PFE) assets grew to $1.85 billion in 2005 up 14 percent from 1.62 billion in 2004 as DAF dealers and their customers have established PFE as the leading European commercial vehicle finance company focusing on DAFs premium equipment," added Gangl.  "The PacLease network continued to expand into key locations in 2005 in order to capitalize on market opportunities.  PacLease achieved its 12th consecutive year of record profits and delivered over 5,700 Kenworth and Peterbilt trucks during the year, as customers realize the benefits of high-quality PACCAR vehicles and PacLeases operating benefits."

PACCAR will hold a conference call with securities analysts to discuss fourth quarter and full-year 2005 earnings on January 31, 2006, at 9:00 a.m. Pacific time.  Interested parties may listen to the call by selecting Live Webcast at PACCARs homepage.  The Webcast will be available on a recorded basis through February 7, 2006.

This release contains "forward-looking statements" within the meaning of the Private Securities Litigation Reform Act.  These statements are based on managements current expectations and are subject to uncertainty and changes in circumstances.  Actual results may differ materially from those included in these statements due to a variety of factors.  More information about these factors is contained in PACCARs filings with the Securities and Exchange Commission. 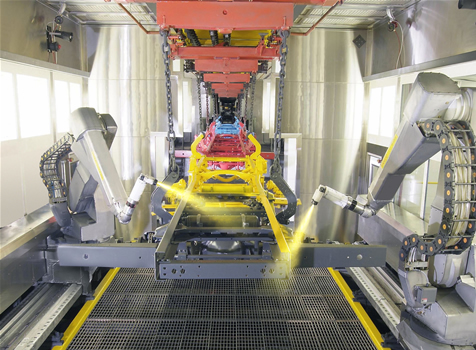 PACCAR (U.K.) engineered an innovative and efficient robotic chassis paint system on a moving assembly line at its Leyland facility the first such installation in the world.