July 25, 2006, Bellevue, Washington PACCAR Inc reported record revenues and net income for the second quarter and first half of 2006, said Mark C. Pigott, chairman and chief executive officer.  PACCAR has earned a reputation as one of the premier technology companies in the capital goods and financial services markets.  The companys outstanding record of performance reflects the passion and commitment of PACCARs 23,000 employees worldwide.

PACCARs superb financial performance for the first half of 2006 is due to worldwide economic growth and the benefits of accelerated new product introductions, complemented by excellent financial services and aftermarket parts programs, which have resulted in market share gains, noted Pigott.  Major capital investments in all facets of PACCARs business are delivering 5-7 percent annual productivity growth, enhanced quality and industry-leading logistics capability.  PACCAR continues to diversify its business platform and is delivering increased revenues and profits from its worldwide finance, leasing, aftermarket parts and information technology businesses.

Stock Dividend and Share Repurchase
Earlier this month PACCAR announced a 50 percent stock dividend of the companys common stock (i.e., one additional share for each two shares held) payable to shareholders of record at the close of business on July 27, 2006.  The new shares will be issued on August 10, 2006.

During the second quarter of 2006, PACCAR invested $64.6 million to repurchase 879,000 of its common shares.  Approximately 3.9 million shares have been repurchased pursuant to the five million share authorization from its Board of Directors.  The repurchase program reflects the Boards confidence in PACCARs successful global business strategy and excellent long-term growth, said Mike Tembreull, vice chairman.  PACCAR has achieved an average earnings per share growth rate for the last ten years of 16.3 percent per annum compared to 7.5 percent for the Standard and Poors 500.

New Parts Distribution Centers (PDCs)
PACCAR Parts has announced plans to construct new distribution centers in two important markets.  A 260,000-square-foot parts distribution center on a 33-acre site in Oklahoma City will open early next year to serve the North American market and a state-of-the-art facility will be built in Hungary to support the companys expanding presence in Central Europe.

Upon completion of these new $25 million facilities, PACCAR will operate 13 strategically located PDCs which provide daily delivery of aftermarket parts to PACCARs growing base of dealers and customers, said Bill Jackson, PACCAR vice president and PACCAR Parts general manager.  PACCAR Parts has more than tripled its sales since 1996, reaching $1.7 billion in 2005.  These additional capital investments will enable the parts business to continue its strong double-digit growth and cushion the cyclicality of the manufacturing business.

This agreement is a natural extension of the engine collaboration, which DAF and Cummins have had in Europe for seven years, said Tom Plimpton, PACCAR president.  The Cummins 4- and 6-liter engines, badged as PACCAR, are exclusive in the DAF LF product.  The DAF LF is the leading light-duty commercial vehicle in the U.K. marketplace and has grown to more than ten percent of the European market.

Financial Highlights Second Quarter
Highlights of PACCARs financial results during the second quarter of 2006 include:

Financial Highlights First Half
Financial highlights for the first six months of 2006 include:

Industry Awards
PACCAR has received outstanding industry recognition for superior business innovation and performance.  In its June 2006 edition, Industry Week (IW) magazine recognized PACCAR as one of the 50 best manufacturers in the United States.  IW evaluated revenue growth, profit margin, return on assets and inventory turns, as well as other key financial ratios over the past three years, with emphasis on 2005 results.

At the inaugural Global Six Sigma Awards last month, PACCAR was recognized for Best Achievement Integrating Lean and Six Sigma. The award was established to identify the most outstanding achievements through the application of Six Sigma methodologies.  Since 1999, PACCAR has completed over 5,200 projects and trained over 8,500 employees in Six Sigma methodologies, added Helene Mawyer, vice president.  Together with PACCARs capital investment program, the companys six sigma initiative has generated annual productivity gains of 5-7 percent and industry-leading product quality.  PACCAR is increasing its capital investment in its suppliers to improve proprietary capacity, lower cost and enhance quality.  It is pleasing to note that many industry suppliers have identified PACCAR as their #1 OEM for design and productivity ideas.

Strong But Slowing Global Truck Markets
Industry truck sales in Western Europe above 15 tonnes should be slightly higher this year compared to 2005, said Aad Goudriaan, DAF Trucks President.  DAFs premium vehicles are the quality and resale value leader in Europe and have increased their year-to-date market share to over 15 percent.  DAFs long-term goal is to achieve over 20 percent market share, noted Goudriaan.  For 2007, industry truck sales could have another good year with sales of 230,000-260,000 units compared to about 260,000 units for Western Europe during 2006.

Truck fleets are earning record profits and have increased their demand for current year truck models, shared Tom Plimpton, president.  PACCAR expects U.S. and Canadian Class 8 sales to be 310,000-320,000 units for 2006.  Superior quality, reliability and resale value of Kenworth and Peterbilt trucks have contributed to the excellent operating performance of PACCARs customers, added Plimpton.  It is expected that 2007 industry retail sales will be at a reasonable level of 200,000-250,000 units, as the industry acclimates to the higher powertrain costs required to meet EPA 2007 emission regulations.  The vibrant U.S. economy, with consensus GDP growth forecast of nearly three percent in 2007, will have a positive impact on new truck demand, balancing the downward pressure due to higher component cost.

Financial Services Companies Achieve Record Earnings
PACCAR Financial Services has a portfolio of more than 147,000 trucks and trailers, with total assets of nearly $9 billion.  Included in this segment is PACCAR Leasing, a major full-service truck leasing company in North America, with a fleet of over 24,000 vehicles.

PACCAR will hold a conference call with securities analysts to discuss second quarter earnings on July 25, 2006, at 9:00 a.m. Pacific time.  Interested parties may listen to the call by selecting Live Webcast at PACCARs homepage.  The Webcast will be available on a recorded basis through August 1, 2006.  PACCAR shares are listed on NASDAQ Global Select Market, symbol PCAR, and its homepage can be found at www.paccar.com.

This release contains forward-looking statements within the meaning of the Private Securities Litigation Reform Act.  These statements are based on managements current expectations and are subject to uncertainty and changes in circumstances.  Actual results may differ materially from those included in these statements due to a variety of factors. More information about these factors is contained in PACCARs filings with the Securities and Exchange Commission. 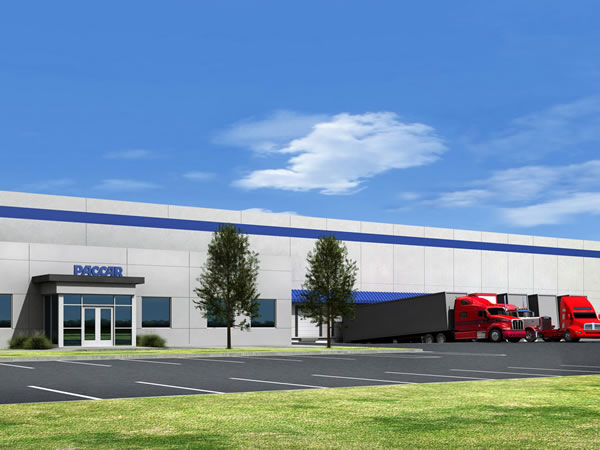 PACCAR Parts will open a new 260,000-square-foot parts center in Oklahoma City, Oklahoma, during the first quarter of 2007.