PACCARs geographic diversification, disciplined business practices and innovative product breadth have been key success factors in the companys outstanding financial performance, added Pigott.  Over the past 10 years, PACCAR has invested over $1.5 billion to fund capital projects which have enhanced the companys technology leadership, resulting in the highest product quality and customer satisfaction in the industry.  In addition, completion of 4,600 Six Sigma projects has contributed to the companys record manufacturing efficiency.

Board Authorizes Additional Five Million Share Repurchase Program
The PACCAR Board of Directors today approved the repurchase of up to five million shares of its outstanding common stock.  PACCAR has recently completed the acquisition of five million shares under a previous authorization dating from December 2004.  PACCARs profit and cash flow performance have been outstanding, said Mike Tembreull, vice chairman.  The repurchase programs reflect the Boards confidence in PACCARs successful global business strategy and excellent long-term growth. Based on total dividends, including regular and special during the last 12 months, PACCARs dividend yield is 4.4 percent.  The companys stock has outperformed the Standard & Poors 500 Index for the previous three-, five- and ten-year time periods.

PACCAR has achieved a compound annual growth rate (CAGR) in earnings for the last ten years of 16 percent compared to the S&P 500s growth rate of 7 percent.  Over the same period, PACCAR has earned an average annual ROE of 21.4 percent.  PACCAR has positioned itself as a leading provider of capital goods, financial services and logistics technology to a growing customer base, added Tembreull.

Humanitarian Aid
In 2005, there have been a number of natural disasters around the globe, said Jim Cardillo, senior vice president.  PACCAR and its employees have contributed more than $2 million, in cash, to the American Red Cross for the Asian tsunami and Hurricane Katrina relief efforts.  In addition, Kenworth and Peterbilt each donated a new Class 8 truck to the city of New Orleans to aid them in their extensive rebuilding program.

During the third quarter, gross margins increased to 15.0 percent compared to 14.3 percent for the same quarter in 2004.  The increase was due primarily to improved margins realized on the sale of Kenworth and Peterbilt trucks in North America as customers recognize the superior quality, reliability and life-cycle cost advantage of PACCAR products.

PACCAR Winch, one of the largest winch manufacturers in the world, had higher sales and earnings compared to the third quarter and first nine months of last year.

Global Truck Market Update
Industry truck sales in Western Europe above 15 tonnes are expected to be a record 255,000 units this year, a 7 percent increase from 2004 results.  Preliminary estimates for Western Europe industry truck sales above 15 tonnes in 2006 are 245,000-265,000.  DAF has increased market share due to its high-quality vehicles, comprehensive aftermarket programs and an expanding independent dealer network, said Aad Goudriaan, DAF Trucks president.  DAFs year-to-date heavy-duty market share is 13.6 percent significantly higher than its record level of 12.8 percent in 2004.  DAFs long-term goal is to achieve over 20 percent market share, which is comparable to PACCARs Class 8 results in North America.

To expand its already extensive product line, DAF recently introduced the new XF105 model powered by the new 12.9 litre PACCAR MX engine, available in both Euro 4 and Euro 5 specifications.  Production of the DAF XF105 will commence in the first quarter of 2006 and sets the standard for quality, efficiency, comfort and drivability.

In the U.S. and Canada, industry Class 8 retail sales for 2005 are expected to be about 290,000 units, nearly 25 percent higher than a year ago.  For 2006, industry sales could be 290,000-310,000 units as customers continue to update their fleets and satisfy the needs of a growing economy.  Healthy freight volumes, strong carrier profitability and equipment replacement cycles are driving higher industry sales, explained Tom Plimpton, president.  Kenworth and Peterbilt truck deliveries have increased in all customer segments including for-hire carriers, private fleets, vocational customers and leasing companies.

PACCAR continues to be recognized as the highest-quality manufacturer in the industry.  Kenworth Truck Company earned three J.D. Power awards in 2005 by achieving the highest ranking in customer satisfaction among Class 8 truck owners in the Over the Road, Pickup and Delivery, and Dealer Service segments according to the recently released J.D. Power and Associates Heavy-Duty Truck Customer Satisfaction Studysm*.  Additional information is available at JDPower.com.

2007 Engine Emission Outlook
PACCAR, in tandem with its major engine suppliers Cummins and Caterpillar, is actively testing engine and aftertreatment systems to meet more stringent federal emissions regulations in effect January 2007.  This is another step in the regular engine development cycle that the industry addresses every few years, said Tom Plimpton.  There will be cost increases due to the advanced engineering solutions, but that cost is typically passed along the logistics chain.  General economic growth should normalize industry sales during the 2005-2007 ordering cycle.

PACCAR Technology
InformationWeek magazine recently announced that PACCAR is the #1 technology integrator in the automotive industry and one of the technology leaders in all industries.  InformationWeek reviews the strategies, investments and practices of companies in 21 different industries.  PACCAR collaborates with innovative companies such as Dell and Microsoft during the development of new IT products, noted Janice Skredsvig, vice president and CIO.  PACCARs technology investments have accelerated product development cycles, increased manufacturing efficiencies, enhanced product quality and streamlined aftermarket customer support. Additional details about the recognition are available at InformationWeek.com.

Information technology is applied in all facets of PACCARs business to generate the highest quality processes and products in the industry.  As an example, the companys production facility at Leyland, U.K. designed and implemented sophisticated robots for painting vehicle chassis on a moving line a first for the automotive industry.  This advanced technology improves quality, accelerates vehicle throughput and reduces material usage, said George West, PACCAR vice president, manufacturing.  PACCARs innovative approach to integrating technology into the vehicle assembly process led Assembly Magazine to name PACCAR as one of the Top 50 global manufacturers and to recognize the Kenworth Renton facility as the first recipient of their Plant of the Year award. Article details can be reviewed at AssemblyMag.com.

PACCAR Financial Europe (PFE) assets have grown to $1.75 billion as DAF dealers and its customers have made PFE the leading European commercial vehicle finance company focusing on DAFs premium equipment, added Gangl.  The PacLease network has grown to 215 locations to support a record number of Peterbilt and Kenworth trucks operating in North America.

PACCAR will hold a conference call with securities analysts to discuss third quarter earnings on October 25, 2005, at 9:00 a.m. Pacific time.  Interested parties may listen to the call by selecting Live Webcast at PACCARs homepage.  The Webcast will be available on a recorded basis through November 1, 2005. 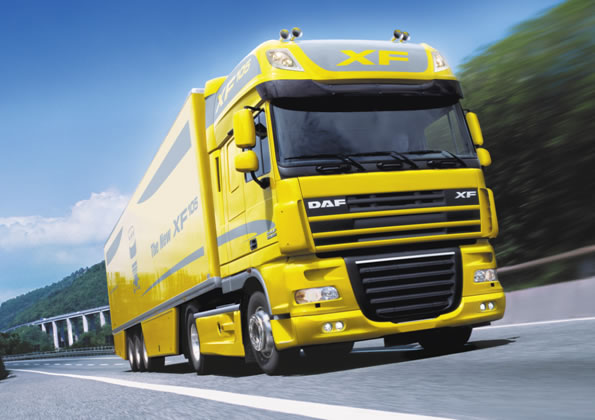